I liked Atypical. I have a good friend with two autistic kids, a daughter of their own and a boy they adopted as a baby without knowing he was on the spectrum. Raising an autistic child has a wide arena of impact but I’m sure the mother usually has the most severe altering of her life. I enjoyed Atypical. They have labeled it a comedy. Eight episodes about 30 minutes each, it goes quickly.

Graham Rogers (playing Evan) is an actor with a very endearing smile in this series. I had seen him before as Al Jardine in Love and Mercy but I didn’t remember him. He’s been around much more than I realized (Revolution, Resident Advisors, Quantico, Ray Donovan). 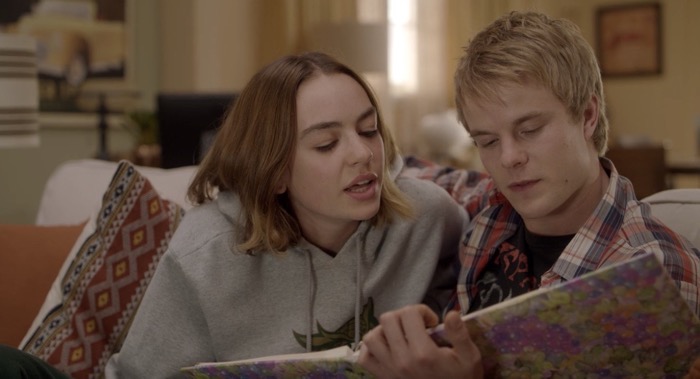 The following includes spoilers. I recommend that you watch the show first.

I was horrified by but understood what Elsa was up to. I thought that Keir Gilchrist did a good job as Sam in the lead. I was disappointed to read in Vulture that at 24, he wanted to be through playing high school students.

Atlantic likes Atypical but not the plot lines of Sam’s mother, Elsa played by Jennifer Jason Leigh and Sam’s good friend Zahid (Nik Dodani). Atlantic also wrote, “it’s hard not to long for a treatment of autism that’s as well-rounded and gutsy as ABC’s Speechless, whose creator, Scott Silveri, based it on his own experience with his brother’s disability.”

There was reaction from writers on the spectrum from Slate and AV Club. Interestingly, Sheldon on The Big Bang Theory is repeatedly referred to as a nuanced performance of a character on the spectrum though TBBT never openly applies that label.

Nice Atypical review on Slate from a member of the autistic community, Gwen Kansen
#ActuallyAutistic @GwendolynKansen

Another person on the spectrum was less kind in their review in AV Club. They did give this positive feedback, “Younger sister Casey (Brigette Lundy-Paine) is by far the most fleshed-out character on the show, and it might have worked better if she had been the main focal point. Casey loves Sam, but also feels put-upon by how much time she has spend looking out for him, and neglected by the family’s constant focus on him. This is laid out quite well in a scene where she wants to tell her family that she’s been recruited by a private school due to her track-and-field prowess, but everyone is distracted by Sam’s relationship with Paige. As irritatingly one-dimensional as Sam is, the show at least does a good job of portraying Casey’s relationship with him in a complex, nuanced way.”