Not all comedies are light hearted. This is the era of black (ie dark) comedy.
I include some of our faves.
I separated out Stand Up because you really have to be in the mood for some standup.
Just added this genre in fall 2019.

Seth Meyers Lobby Baby (Nov 5 2019, Minneapolis): Nice introduction to his family and lobby baby is a true story as evidenced by the photo at the end of the show.

Sarah Silverman, A Speck of Dust (2017): Standup. Some political commentary. Nominated for an Emmy 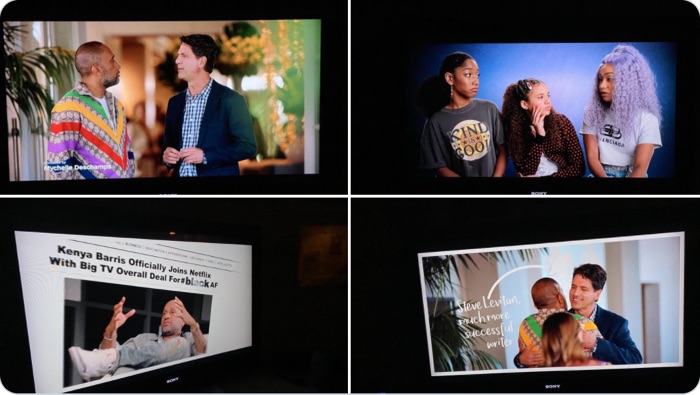 4 images from BlackAF includes cameo from comedy writer Steve Levitan and three of the daughters from the show.

#BlackAF (April 17, 2020): Created by and starring Kenya Barris. Kenya is a writer/producer – not previously known as an actor – know for Black-ish, Grown-ish, and Girls Trip and has 6 children in real life. No that is not actually his family even though the show will convince you they are. Rashida Jones (daughter of Quincy Jones and Peggy Lipton) as his wife, Iman Benson as the lead of his 6 children in the show. Appears to have lots of improv. Very funny though it has serious moments.

Living with Yourself Paul Rudd

Upload (2020, May 1): Sci-fi, Rom-com, Mystery. You may not know the actors but they do a good job. 10 episodes in Season one. After a 45 minute start, the rest of the episodes are about 30 minutes. Amazon Original.