Finally relented and signed up for Hulu, no ads of course, on December 24, 2020. Hulu original content competes for Golden Globe winners.

A great deal of what is on Hulu might be what I put in my “for my girlfriends” category so instead of breaking out that section for this section I am just noting.

Hulu also offers catch up opportunities for series you missed elsewhere. FX is a major one. Notably: TVLand (Younger) and IFC which is owned by AMC (Brockmire).

Good Luck Leo Grande (2022): Hulu Original 90 minute film, directed by Sophie Hyde, starring Emma Thompson and Daryl McCormack, set in England. Older woman never satisfied by her husband hires young escort two years after her husband’s death.
Fire Island (2022): Hulu Original Gay RomCom. Excellent production. Margaret Cho (read her impressive bio), Joel Kim Booster (also writer), Bowen Yang (Awkwafina is Nora from Queens).
Palm Springs (2020): Adam Samberg, JK Simmons, Peter Gallagher, Cristin Milioti. Rom-com, hat tip to Groundhog Day. Hulu original.
Nomadland (2020): Frances McDormand, David Strathairn. Chloe Zhao directed and wrote screenplay. Only a couple of actors, everyone else plays themselves. Up for Golden Globe best picture and other awards. Female Director. Hulu original.
Portrait of a Lady on Fire / Portrait de la jeune fille en feu (2019): written and directed by Céline Sciamma, starring Noémie Merlant and Adèle Haenel. Set in France in the late 18th century, the film tells the story of an affair between an aristocrat and a painter commissioned to paint her portrait. This film got a 98 on Rotten Tomatoes. LGBTQ. Art. Female Director. Multiple awards and nominations for this French production.
The Leisure Seeker (2017): Starring Helen Mirren (1945) and Donald Sutherland (1935) with Dick Gregory (1932 – 2017). Directed by Paolo Virzi (1964). The Leisure Seeker is a 1950’s RV that Ella and John, married couple is driving from Massachusetts to Key West to see Ernest Hemmingway’s Home because John reveres Hemmingway. John has dementia and they escaped their adult children to take this trip. Ella to John when he has a moment of clarity “I’m so happy when you come back to me” “It’s so nice when you forget to be forgetful. Too bad it ends so quickly. I just can’t get used to it.” 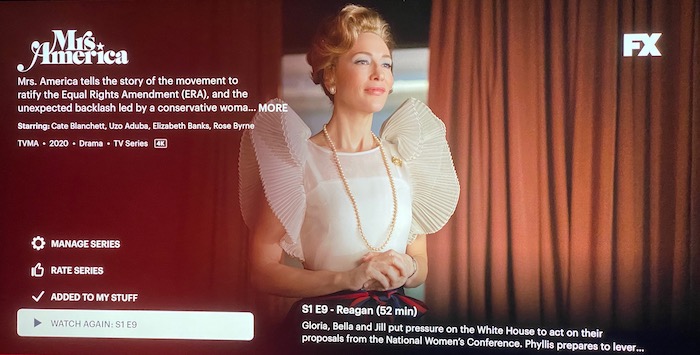 the Great (2020) Starring Elle Fanning. Female directed, empowering and engaging. A comedic stylized loosely biographical drama of Catherine the Great ruler of Russia. Hulu Original.
Little Fires Everywhere (2020): Reese Witherspoon, Kerry Washington, Lexi Underwood, Joshua Jackson. Great series for artists, young adults and me. (for my girlfriends – but this does get a 7.7 on IMDB). Hulu Original.
Normal People (2020): The challenges of being very smart. Young Adult (for my girlfriends). Irish TV series produced for BBC Three and Hulu.
This Way Up (2019): Excellent Irish dramedy set in London about a quick witted woman who has just been released from rehab after an attempted suicide. Aisling Bea, Aasif Mandvi (Daily Show in the era of Jon Stewart, Younger), Tobias Menzies (Outlander, The Crown). Originally on British Channel 4.
Brockmire (2017 -): Very explicit Comedy starring Hank Azaria and Amanda Peet with baseball and alcoholism themes. J.K Simmons in season 3. 4 seasons through 2020. Originally on IFC (IFC is owned by AMC).
Second Chance (2016) Sci-fi cop series. Also in Aging Gracefully genre because of Philip Baker Hall (Sept 10, 1931 – June 12, 2022) being brought back as young and strong. Originally on Fox. One season.
Fargo (2014 -) Starring Billy Bob Thornton, Ted Danson, Kirsten Dunst, Keith Carradine, Ewan McGregor (in 2 roles), Cristin Milioti (Palm Springs) and many more. Retains that Coen Brothers feel of the film. Dangerously binge-able. Originally on FX. Watch the first two seasons for sure. Season three is pretty good. Watch the beginning of season four to see Chris Rock and finish it if you like, it got the weakest reviews of the four seasons. While you expect the characters to cross over between seasons, only Keith Carradine does. Originally on FX.
Girlfriend’s Guide to Divorce (2014 – 2018): Dramedy for my girlfriends. Janeane Garofalo was in the first season but regretfully she left and she is not listed for the show. Alanna Ubach’s character of Jo is very annoying. But overall good for light entertainment. Lisa Edelstein was Alan Arkin (Norman’s) daughter in Kominsky Method. Phoebe (Beau Garrett) might be the most likable.

Tiny Shoulders, Rethinking Barbie (2018): Interviews with Gloria Steinem, historic footage of Ruth Handler – the founder of Mattel, creator of Barbie and her great story. (for my girlfriends)

A bit more on Hulu:
Going through their initiation process of selecting our interests, I could see from the included offerings that this was meant to be an alternative to broadcast TV for cord cutters. It also helped us in our decision to buy and run everything streaming that we can through ApplePlus. We don’t have stock in Spectrum but we do in Apple and generally Apple is a good experience for us.