HBO On Demand used to be simple. It was a benefit from your cable subscription. Now you need HBO Max with your cable or independently. Or get your HBO through Apple TV, Amazon Prime, Sling or DirectTV. No one liked the confusion that ensued with HBO Max after ATT bought HBO but that has finally settled down in 2021.

HBO was the first premium cable channel we subscribed to.
“Dream On” ran 1990 to 1996 and taught us we could see nudity on cable.

Be sure to scroll down for my recommendations for my girlfriends – for those times when you’re watching without your guy.

Talk Shows We Enjoy on HBO

In the Same Breath (August 18, 2021) HBO Max Original. Government propaganda, experience of healthcare workers and citizens in Wuhan China (Jan 1 2020) and USA (March 2020) during the breakout of COVID-19. Female Director Nanfu Wang. Rotten Tomatoes rating 96 / 83
The Inventor: Out for Blood in Silicon Valley (March 18, 2019): The story of Elizabeth Holmes and the Theranos fraud
The Zen Diaries of Garry Shandling (March, 2018): Five hours in two parts. Extremely well done. Great editing of archive footage and Shandlings personal diaries presented by Judd Apatow. With a plethora of celebrity appearances by his comedian friends. Garry died of a heart attack in March 2016.

If not in the Obit, Eat Breakfast (2017): Aging well. Carl Reiner
On HBO Now and HBO Go with Extras. NOT on Cable HBO On Demand 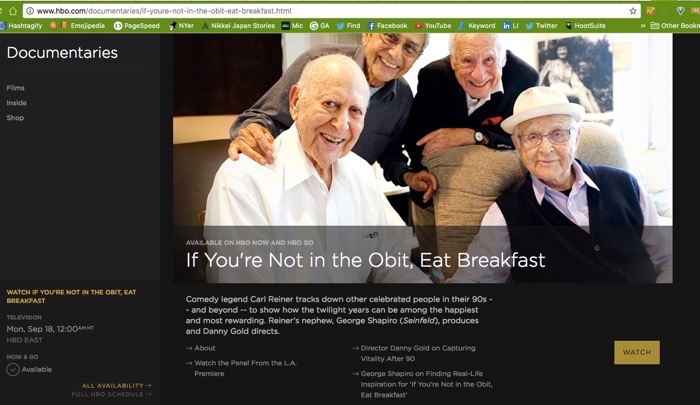 rough-portrait-of-new-yorker-cartoonists – this page includes a display of cartoons from the show.

HBO Original Films and Series for my Girlfriends

HBO Shows We Watched So You Don’t Have To

The Third Day (September, 2020) We love Jude Law but not this. Be aware we are not fans of the horror genre (though we loved Get Out) but this is just tedious. IMDB has it at 6.something so we aren’t the only ones who didn’t like it.
I Know This Much is True (2020, May 10): Great cast with Mark Ruffalo, Juliette Lewis, Kathryn Hahn and more but the first one hour episode was so dark, we refuse to go back for more. Yes Mark Ruffalo gave a great performance. Usually we will watch anything with Juliette Lewis but she is so entirely unlikeable at least in the first episode. Book it is based on by Wally Lamb was a best seller.

HBO is constantly retiring films from this library. I recommend that you check regularly to see “coming soon” and “leaving this month”. If you are already paying for HBO, it is worth checking. I am only updating this when I happen to newly watch a film that I found here.

Films Currently Available Through HBO On Demand
Note that On Demand is limited, to access the HBO library you need to set up HBOgo – free with your HBO subscription.
The Accountant
Hacksaw Ridge (2016)

Watch on HBO Max unless noted. Limited availability through HBO On Demand (see below)
Beware “Watch now on Amazon” HBO listings on IMBD. Unless it says “Watch Now on Amazon Prime” these are Pay per View links or invitations to add an HBO subscription to your Amazon Prime subscription for $14.99/month.
UPDATE December 2021: IMDB now has a decent where to watch list.